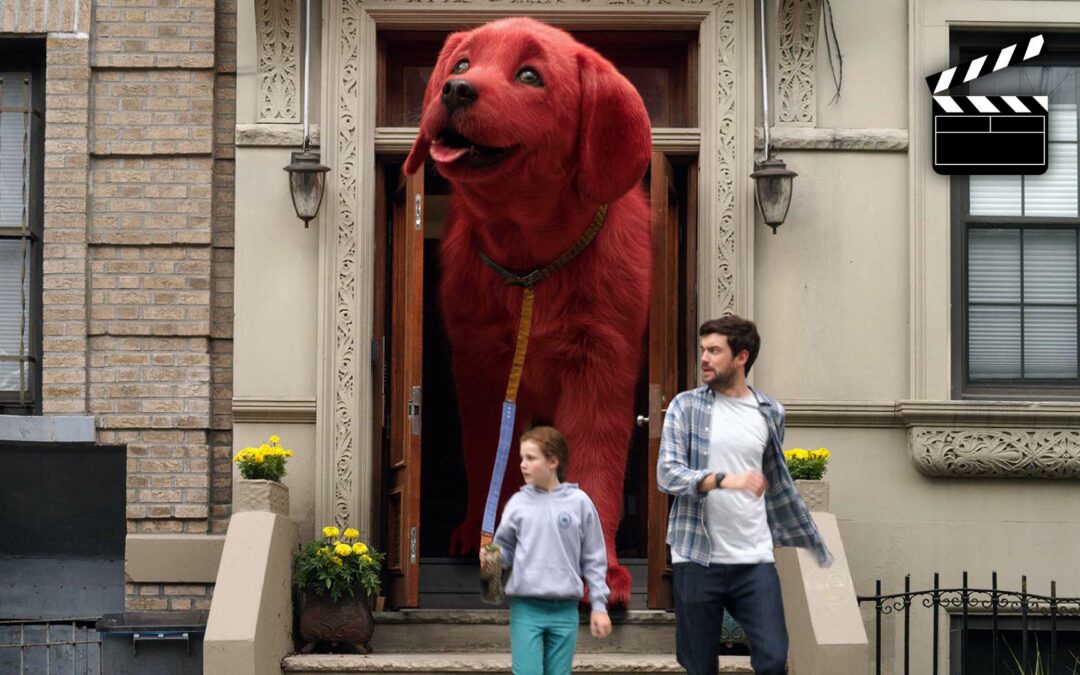 Emily Elizabeth Howard is a young middle school student living with her mother Maggie in New York City. Emily is regularly bullied while finding comfort in her only friend Owen Yu. One day, Emily is left in the hands of her homeless and irresponsible uncle Casey while Maggie goes to Chicago for a business trip.

Mr. Bridwell, who runs an animal rescue tent at a carnival, introduces Emily to a small red puppy whose family had been stolen by the dogcatchers. He tells her that the puppy will grow bigger in size based on how much love he receives. Casey says no to the adoption, knowing that his sister will never allow it and that dogs are prohibited in her apartment building. When Emily gets home from school that day, after being bullied once again, she finds that the puppy has stowed away in her backpack and names him Clifford. Emily tries to convince Casey to let her keep him and he allows her to keep Clifford only for one night. A heartbroken Emily tearfully wishes for Clifford to be big and strong as her tears trickle onto his nose while falling asleep with him.

The next day, Emily wakes up to realize Clifford is gigantic in size. Casey also learns about this and they both attempt to hide him from the building’s superintendent, Mr. Packard, as he fixes the dishwasher. They take him to the vet, thinking he is possibly ill while attempting to hide him from everyone. This fails dramatically since Clifford’s dog instincts cause him to chase and play with a man in an inflatable bubble, seeing it as a game of fetch. This attracts large crowds and the word of his existence quickly spreads online. After learning from the vet’s secretary of Mr. Bridwell’s past miracles with animals and their owners, they plan to get information on his whereabouts from the private school’s computer. As Emily is getting lunch for Clifford from the cafeteria, Clifford escapes from Casey’s truck while one of the bullies, Florence, bumps into and bullies Emily again, only for Clifford to enter the cafeteria and humiliate Florence. This finally gives Emily the friends she always wanted.

So I can easily say that Clifford the Big Red Dog offered me one of the weirdest but surprising viewing experiences I have had for a while. Firstly, while the cinema was full of families with their kids, I didn’t hear a single child crying or throwing a temper tantrum, so they obviously enjoyed the movie! I’ve been to many many family-friendly films and this was undoubtedly a first! The second was that the whole cinema started clapping when the film ended. I have never been in a cinema where people clap when the movie ends – My only experience like that was in Avengers: Endgame. So obviously some people enjoyed Clifford as much as the legendary Marvel movie.

In all seriousness, I found Clifford to be an incredibly heart-warming story with love at the center. While it did definitely have its shortcomings the lovable Clifford is genuinely such a delight that anyone can enjoy the movie. The comedy primarily falls on the fact that Clifford is just a big red dog doing normal do things, but because of his remarkable size, chaos is always bound to ensue.

While performances across the board came across as exaggerated and over the top, they are always entertaining with Jack Whitehall being a favorite among viewers (Despite adopting an American accent for the movie). Child actors are always a toughie because critiquing kids always feel just a little uncomfortable, but thankfully the child cast was solid enough and was able to accurately capture the wonder of witnessing a giant dog walking through New York.

The biggest downfall was unfortunately the special effects used to bring Cliffordto life – In short, the CGI was incredibly noticeable and at times jarring and immersion breaking. However, I will say that I never thought the CGI was so bad that it would “Give children Nightmares” as so many other reviewers have said. I think the CGI was most noticeable in the final act and felt a bit like watching a cutscene from a video game. But, Clifford’s adorable personality is so captivating that I am willing to ignore the shoddier effects.

All in all, Clifford The Big Red Dog was a heartwarming tale that I would easily recommend to families looking for something to watch over the weekend.